This summer the New Classics Company is thrilled to announce the return of one of our first members, David Orlando, who will be working as our resident lighting designer and technical director. That’s why we’ve decided this week to shine the NCC spotlight on him. We sat down with David to find out a little bit more about what he’s been up to, and what he’ll be doing at the barn this year! 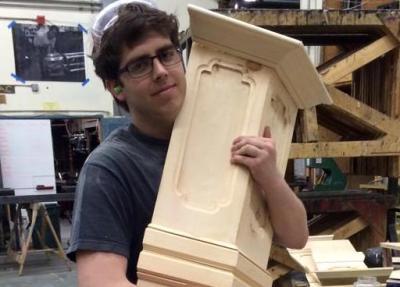 Tell us a little bit about yourself.

Well I’m originally from Marston’s Mills. I was Cape Cod born and raised. I met Matt at Barnstable High School, where I first knew him as Mr. Matt. At Barnstable, I started doing technical theater work in my Sophomore year, working as a stagehand for Grease. That was my first big break. I got to open the garage door and drive the car out onstage. By the end of my Sophomore year I was starting to do some lighting design work, designing for a Shakespeare comedy. I did some acting as well, playing Jupiter in Cymbelline. By the time I first encountered New Classics, I’d pretty much done everything but costumes. Then Matt came calling one day, and I answered. And he just kept calling after that, so now I’m coming back for my third summer with you guys. In the offseason since last year, I completed my freshman year at B.U. in the Theatre Design and Production program. And I actually just declared as a lighting design major, so hopefully that educational experience will kind of show itself off this year.

You’ve already touched on it a bit already, but what brings you to New Classics this summer?

Well yeah. Obviously I’ve already worked with you guys for the past two summers, so I couldn’t really pass up the opportunity to be there for the third. I was also really looking for somewhere that I could get opportunities to design and be an artist, and not just do all the manual labor. Not to say the labor part isn’t important, but I wouldn’t have got the artistic opportunities that I’ll get with NCC somewhere else in say like an internship capacity. I’ve also just been there since the beginning, so I couldn’t really leave now. I was working at the Cape Cod Melody Tent the summer you guys first did Complete Works of William Shakespeare. When Matt offered me a job with no pay, I figured it was slave labor with you guys, or slave labor somewhere else. And you guys seemed fun and interesting so I figured why not? Now I’ve been lucky enough to design three years in a really awesome environment where I’m really just allowed to play and have fun.

Tell us a bit more about the projects you’ll be working on New Classics.

Well obviously I’ll designing the lights for everything all season long. I think the big one that I’m really excited for though is the interpretation of Alice in Wonderland. I think Greg said it really well when he said Alice is more of  style than a story. It’s a setting more than anything else, and as a designer it’s a really fun world to just hang out in. So I think that’s going to be really cool. And obviously I’m excited to work on Star Wars again. I designed both Shakespeare and George Lucas, so I’ve really gotten to see those characters grow, um, or actually kind of not grow at all over time. But whenever I work with you guys on the sort of like “Justin, Brett, & Matt comedy hour” thing that you guys do, I know it’s going to be a really fun time. I think that’s sort of why I really like working on shows with you guys. They’re never the ones that never require vast amounts of research. You don’t want us to have our heads in books, you want us to have our heads in the show, and so you really sort of let’s the designers just kind of hang out in this world and play. It makes it really feel like a collaborative process.

Well you kind of answered it already, but is there anything else that excites you about working with New Classics?

I think for me it’s very much a benchmark. I’ve done it three years now, and I’ve seen New Classics at three very different points in it’s development. I was with you guys when it was just one, self-produced show, touring around the Cape for fun. I was there when it was first real season. And now I’m back as you guys sort of find your brand. And I’ve been doing all of this at huge developmental points in my own life as well. The first year I was a high school senior, last year I was making the transition to college, now I’ve just finished my first college year. There’s obviously been huge changes in my own life as well. And I think I’m honestly just excited to come back to this laid back but exciting setting where I can really see and feel the growth that I’ve made as an artist.

Getting to know you better:

If you could have dinner with one person, living or dead, who would it be?

The guy who played Andre in My Dinner with Andre.

Yeah. I never saw the movie. I just want to get the hype. I want to get what it’s all about.

Would you rather be a carrot or a potato?

If you could say one thing to our audience, what would it be?

Don’t overlook us cause we’re small. I think most of the theatre on Cape Cod has a great history and tradition to it. Not that that’s a bad thing, there’s a lot to be said for that tradition, but it can also make some of it very esoteric. New Classics doesn’t feel like that. I think we try to be more modern and accessible and that makes it a cool atmosphere. You shouldn’t treat us like a night at the theatre, more like we’re going for a night to hang out with these people. Or almost more like a night at the movies. You don’t feel like an audience in the traditional sense at New Classics. It really feels like a shared experience.

We couldn’t be more excited to have David with us again this summer and we can’t wait to see what he’s going to do at the barn! In the meantime, don’t forget to check us out on Facebook at https://www.facebook.com/newclassicscompany, and check out this summer’s IndieGoGo campaign at https://www.indiegogo.com/projects/new-classics-second-annual-summer-in-the-barn. Swing on by this summer to see David and the rest of the New Classics gang in action. We can’t wait to see you at the barn!